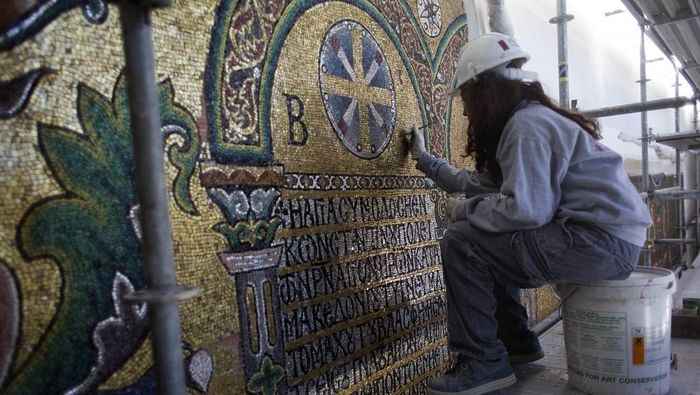 A restoration expert works on a mosaic inside the Church of the Nativity in the West Bank city of Bethlehem on Feb 4, 2016. (AP Photo/Nasser Nasser)

Al-Bandak told the Ma’an news agency that the icon was discovered near a window under plaster nearly two months ago and is made of brass, silver, shells and stones.

The icon has reportedly been repaired and the plaster covering it removed. But it is not available for public viewing and images have yet to emerge.

Despite its spiritual significance as the reputed birthplace of Jesus, the Church of the Nativity was neglected for centuries and is listed as endangered by UNESCO, the United Nations cultural agency. Until two years ago, rain leaked through the severely damaged rooftop, threatening to harm priceless artworks inside.

In 2013, the Palestinian Authority took the lead in financing a restoration of the building. The rest of the funding has come from the Palestinian private sector, the Roman Catholic, Greek Orthodox and Armenian churches and other countries. Al-Bandak said nearly $8 million has already been spent.

Renovated mosaics and windows in the Church of the Nativity, in the West Bank city of Bethlehem on February 4, 2016. (AP Photo/Nasser Nasser)

After two years of painstaking work, experts completed the initial phase of a delicate restoration project at the church last week.

Al-Bandak, who is leading the Palestinian committee in charge of the restoration, called what has been accomplished so far nothing short of “revolutionary.”

“For the first time you can see, when you go up, mosaics really magnificent and beautiful and unique in the whole world,” he said.

According to reports, the removal of centuries of dust has left Crusader-era mosaics sparkling in sunlight filtering through brand-new windows. Structural repairs of the fragile roof has also been completed and art treasures have been returned to their delicate elegance.

The renovation is being conducted by a joint team of engineers, restoration experts and workers — Palestinians as well as Italians from “Piacenti,” a firm that specializes in the renovation of historical sites and has worked on dozens of villas, palaces, churches and monasteries in Italy and Russia. 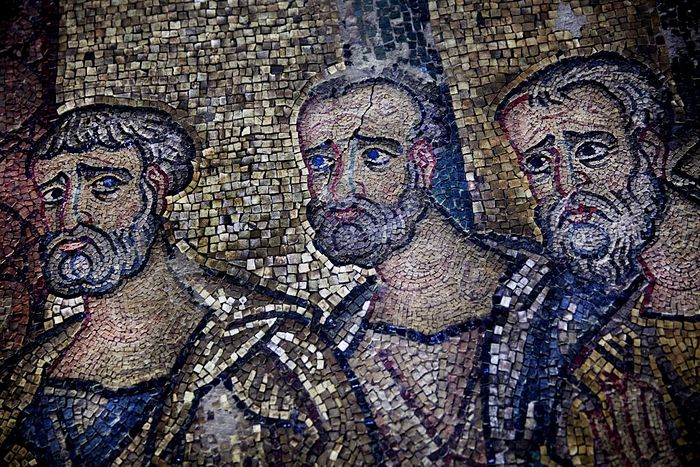 A cracked mosaic is prepared for restoration inside the Church of the Nativity, in the West Bank city of Bethlehem on February 4, 2016. (AP Photo/Nasser Nasser)

Al-Bandak said in an earlier interview that an additional $11 million is needed. The Palestinian Authority has already launched a campaign to raise the funds and PA President Mahmoud Abbas has pledged to follow through.

“He told me from the beginning: ‘Even if you don’t have all the money to go ahead, start. This is a holy place and money will come,'” he said.

The completion of the first phase is already a source of pride. “We are very proud of it because when we protect our national heritage, our history, we protect our future,” al-Bandak said.

The Times of Israel