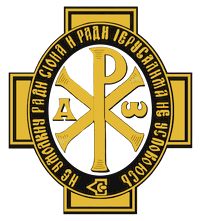 The Imperial Orthodox Palestinian society, a charitable scientific organization. It was created in 1882 on the initiative of Grand Prince Sergei Alexandrovich (president for life) with the purpose of supporting Orthodoxy in the Holy Land (including Syria and Lebanon), acquaintance of Russians with the Palestine and pilgrimage to the Holy Land.

The Administration of the Palestinian Society, which had sections in many eparchies, was located in St. Petersburg at 36 Voznesensky Avenue. In 1885, the Chapel of St. Alexander Nevsky in Old Alexander's Market, which had raised money for the restoration of the Church of St. Nicholas of Mira in Turkey was transferred into the ownership of the Palestinian Society. In 1905, the chapel was sanctified as St. Nicholas’ Church. In 1913-15, the church dedicated to St. Nicholas of Mira was erected in its place in the Neo-Russian style. At the same time the Palestinian Society started building the Russian representative office with a church in the City of Bari in Italy, but the project was not completed on account of the Russian Revolution.

In 1918, the Russian Palestinian Society was transferred to the Russian Academy of Sciences; its Russian properties were nationalized.

The society now functions abroad under the original name along with the Jerusalem Spiritual Mission of the Moscow Patriarchate taking care of Russian Churches and Institutions in the Holy Land. In 1992, it was restored to its former status in Russia.