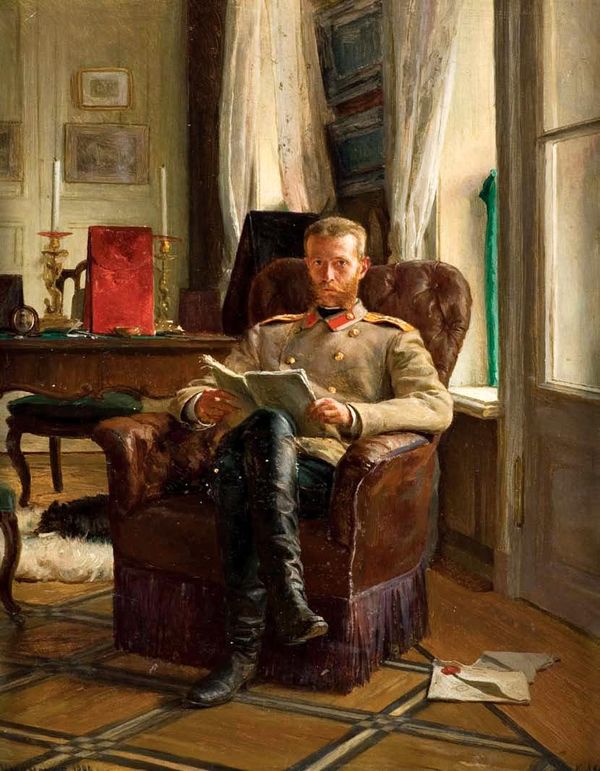 
The exhibition The Romanovs: Portrait of a Dynasty, will close on February 10th at the State Historical Museum in Moscow, however, one final interesting touch to compliment the exhibit in its final week is a unique portrait of Grand Duke Sergei Alexandrovich (1857-1905).

The small portrait is slightly larger than the album the Grand Duke Sergei Alexandrovich is reading at his summer residence at Ilyinskoe. The portrait was painted in 1886 and was intended, according to historians, as a gift to his wife, the Grand Duchess Elizabeth Feodorovna. The portrait was painted by the Russian painter of German origin Karl Lemokh (1841-1910). A graduate of the Academy of Arts, he was one of the founders of the Wanderers. His works can be seen in the Tretyakov Gallery in Moscow and the Russian Museum in St. Petersburg.


Lemokh, received the Orthodox name of Cyril at the Russian Court of. He accepted an invitation to give private lessons in drawing and painting to the children of the Emperor Alexander III, including His Imperial Highness the Heir Tsarevich and Grand Duke Nicholas Alexandrovich, the eldest son of Alexander III, the last Russian Emperor Nicholas II. However, his most talented pupil was the younger sister of Nicholas,  Grand Duchess Olga Alexandrovna. Olga took a serious interest in painting, one that she enjoyed for the rest of her life. During her lifetime, she painted more than 2,000 paintings, and today are highly sought after by collectors.


Lemokh's portrait of Grand Duke Sergei Alexandrovich will be on display at the State Historical Museum until February 10, along with other paintings and photographic portraits of the imperial family during the final days of the exhibition The Romanovs. Portrait of a Dynasty. During my visit to Moscow in October 2013, I had the opportunity to visit this exhibit. The collection of paintings and photographs was superb! Many were new even to me, and the exhibit ranks among the finest that I have seen to date on the Romanov dynasty.