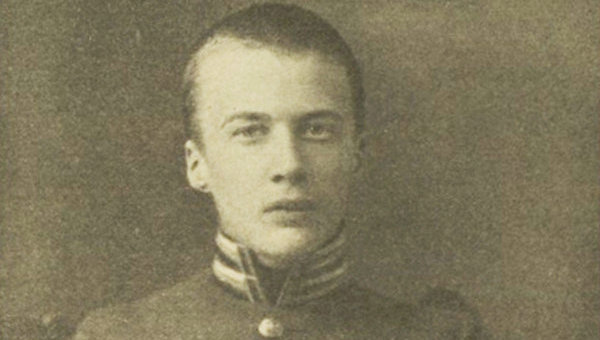 A prince of royal blood, Oleg Romanov was born in St. Petersburg on November 27 (November 15, Julian calendar), 1892. His father was Grand Duke Konstantin, the president of the Imperial Academy of Sciences, director of all cadet schools and a famous poet known by the pseudonym “KR” and his mother was known in Russia as Grand Duchess Yelizaveta Mavrikiyevna (née Mary Elizabeth August Agnes, daughter of the Prince of Saxe-Altenburg, Duke Moritz of Saxony).

Since childhood Romanov was fond of literature and music. In 1910, he graduated from the Polotsk Cadet Corps but had to study at home due to poor health. He was the first from the Romanov family to receive a civilian education.

In 1913 Romanov graduated from the Imperial Alexander Lyceum with a silver medal. His graduation paper “Feofan Prokopovich as a Lawyer” won him a Pushkin medal for scholarly and literary distinction.

While studying at the lyceum in 1911, he published a collection of Alexander Pushkin's hand-written manuscripts, The Pushkin Manuscripts. I. Autographs of the Pushkin Museum of the Imperial Alexander Lyceum.

In 1913 he was conscripted into the Imperial Guard Hussar Regiment with the rank of cornet. Shortly after, he became engaged to Princess Nadezhda, daughter of Grand Duke Pyotr.

In the summer of 1914, the Imperial Orthodox Palestinian Society sent Romanov on a mission to Bari, Italy, to negotiate the construction of a Russian Orthodox Church and an almshouse in the city.

Initially he was posted to the regiment's headquarters, but in September 1914 he insisted on being transferred to the 2nd Squadron.

Romanov took part in hostilities on the Northwestern Front, fighting in the famous battle of Kaushen; the broad offensive towards Konigsberg (present-day Kaliningrad); and near the Deima River and the cities of Tapiau and Shirvindt.

On October 10 (September 27, Julian calendar), Russian patrols discovered an enemy party not far from the village of Pilvishki in the vicinity of Vladislavov in the Suwalki Province. They started shooting at the Germans who retreated only to run into the Hussar vanguard party. Prince Oleg led his regiment as they pursued the enemy. The Germans were hacked to death or taken prisoner. As Romanov approached the Germans, one of the wounded riders drew a carbine and shot him in the belly at close range.

He was awarded for his combat achievements with the Order of St. George Fourth Class for courage and bravery in fighting and defeating the Germans. Oleg was the only member of the Romanov family to die in action in World War I.

On October 14 (October 1, Julian calendar), 1914 Archbishop Tikhon of Vilno and Lithuania (Bellavin), the soon-to-be Patriarch Tikhon, conducted a funeral service for Oleg Romanov at the St. Michael Church. He was buried at the Ostashevo family estate in the Moscow Province.

In memory of her son, Grand Dutchess Yelizaveta Mavrikiyevna instituted a silver medal award for the best domestic literature written at the Imperial Alexander Lyceum.

The Vilno grammar school, which had been converted into the hospital where Prince Oleg Romanov died, was named after him in spring 1915.