Mikhail Piotrovsky: «We Have a Common Purpose».
Interview for the magazine Voda Zhivaya


This civic organization was created with the goal of supporting Orthodoxy in Palestine, as well as facilitating pilgrimages and scientific and educational activities. Throughout all of Russian history, the IOPS has become the most successful organization to operate abroad. We are discussing the Russian presence in the Holy Land and the future of Christian churches in the Middle East with Mikhail Borisovich Piotrovsky, the Director of the State Hermitage, and Chairman of the Saint Petersburg branch of the IOPS. 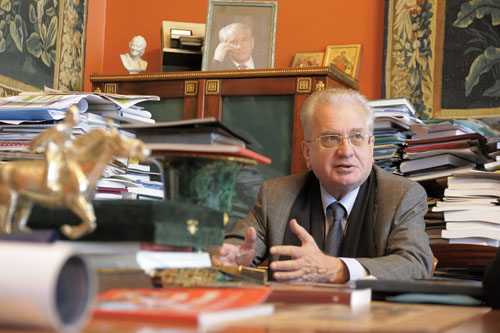 — Mikhail Borisovich, during the Soviet period the Imperial Orthodox Palestine Society continued to exist, although the words “Imperial” and “Orthodox” were removed from its name. How can this phenomenon be explained?

— From the very beginning, the Society combined pilgrimage with educational and scientific work. Depending on the general situation one type of activity sometimes predominated. For example, since 1917, the Society began to exist, first and foremost, as a scientific, book-centred institution, since pilgrimages to Palestine in the Soviet period were impossible. This scientific aspect enabled the society to survive as a legal entity. This was a great achievement by Russian scientists, who managed to tack when they had to, sometimes compromising and sometimes standing on principle, but developing what they could in a difficult political situation. Thanks to them, scientific work connected with Palestine has evolved in every way. Almost throughout its entire existence, the Society has published the Palestinian Anthology, where one could find both Semitic Studies and Heraldry, papers on Eastern Christianity and Byzantine studies, even hagiography. The Palestinian Anthology was the best scientific journal in Russia. Serious academic work was published there without any consideration for politics. Thanks to this situation, the Society survived, and papers on Eastern Studies got a chance for publication. Much of this can be attributed to Nina Viktorovna Pigulevskaya, who was the heart of the Palestine Society for many years; she was a great scientist, a specialist in Syria, and a person of deep faith and devotion. She was repressed for her participation in Church life, but she managed to do a great deal to protect the study of Eastern religions, including Eastern Christianity. She was the very definition of a Russian intellectual, who is able to do good and right things under any regime.

— What has changed today?

— The archaeological aspect of the IOPS has come back, we have managed to renew our excavations in the Holy Land. Pilgrimages are underway again. We currently have excellent relations with the Church, but are quite a few problems, which society tends to inflate. It’s simply the spirit of the time, everyone wants to attack the Church and culture in general. The Palestine Society is a model that can help people to develop the correct form of cooperation in new circumstances.

— How was the return of the IOPS received in the Holy Land?

— Of course, we had to resolve a great deal of legal and property issues. Our Ministry of Foreign Affairs contributed a great deal here, as did positive memories of the IOPS. This organization did not serve the narrow interests of Russia, but rather created an atmosphere where these interests could be advanced in a way that benefited everyone. As a result, the IOPS has excellent relations with the government of Israel. The return of the Saint Sergei Mission in Jerusalem to the Society is important evidence of this development. The restoration of the Society’s operations in Palestine itself was met with great enthusiasm. Initially, organizing pilgrimages took up more of the organization’s time than pure science. Let me remind you that from the very beginning, one of the areas where the IOPS works was building Russian schools in Palestine; the people there remember that to this day. Restoring these schools is very important today, because a Russia presence is essential to support Christianity in Palestine. After all, Christianity is practically being destroyed in the Middle East. This is another area where we can use our traditional methods of cultural cooperation.

— Which aspect of the scientific work of the IOPS is more interesting to you as a scientist?

-I am interested in the historical interactions of Christian and Islamic cultures in Palestine. People of different religions lived in one culture or in extremely similar cultures. That made it possible for them to live in relative peace, even during the age of the Crusades. In many ways, both of these cultures fed on this cooperation. This subject is very widely represented in the Hermitage collections. We have a lot of items that were made for Christians by Muslims. (For example, the famous horn from the Kunstkamera of Peter the Great is made in the Eastern miniature style, it has an inscription celebrating a certain leader, and the Four Evangelists are also depicted there. It is clear that this item was made for a Christian client). Anton Pritula, the head of the department that works with Muslim art, conducted excellent research on different aspects of the Christian presence in Persia. Cultural life on the border of two religions is very interesting. The study of Islam and Christianity in the East may hold the key to what must be done now.

— How do representatives of Islamic culture see this kind of scientific cooperation?

— They are willing to have us doing it. They can’t do it themselves, for various reasons, nor are they even preparing for it. This preparation is at the heart of the Palestine Society, when regardless of their religious affiliation, people study various cultures and instances of cultural cooperation. This is the unique principle that guides our work.

— In Syria today there is a struggle between the government and the opposition, which represents radical Islamists. How might this affect Christian communities in Syria?

— I think that the results may be tragic. If the opposition wins and no consensus is found, then Christianity in Syria will come to an end. A huge number of refugees are already fleeing the country. I very much hope that the Western powers will not support the opposition, as they did in Libya, because it is clear that any new regime will be terrible for Christians. It is interesting that the alawi regime is good for Christians, since they are in the minority, and that sect is a guardian of all of the confessions and religious communities in the country. If the Sunnis come to power, however, it will be a tragedy. We must do everything in our power to prevent that tragedy from occurring, and that fact that our government, despite shouts of protest from around the world, is supporting Syria with its existing regime is absolutely correct. For us, Eastern Christianity is a natural ally, a brother, and for that reason it has always been our spiritual obligation to support it.

— What future do the Christian churches have in the Middle East?

— I think that it is very important for Islam that the Christian churches be preserved. The character of the Middle East cannot be preserved without Christians. Today people are already forgetting that the Palestinian resistance movement of the 60’s and 70’s was primarily Christian. The famous George Habash, one of the left radical figures of the Palestinian national liberation movement, was from an Orthodox family.

I think that political Islam will weaken. Like any religion, Islam can be used for any political ends. In this case all conflicts that acquire the taint of religious fanaticism (for example, Arab Spring in Syria) are connected, first and foremost, with social problems, and religion is used as a cover for religious interests. I hope that radical, fanatical movements and the religion of Islam itself will go in a different direction. I repeat, it is very important for the Christian churches to exist alongside Islam. In Tatarstan, one can find a striking example of such coexistence: in the Kazan Kremlin, there is an Orthodox Church and Qolsharif Mosque. What the government of Tatarstan is doing is an important example for the world. It must be recognized in Europe where cooperation between Christians and Muslims may lead to a weakening of the hysterical and fanatical sides of politics. It is important to protect fragile religious peace where it can be found.

— What is your opinion about returning icons and ceremonial items of great artistic significance that were seized during the Soviet period.

— I have voiced my position on this issue many times. In this case it is better to speak of “transferring”, rather than “returning”. This is because it is precisely cultural institutions that saved part of our cultural heritage that have both religious and artistic functions. Everything else was lost. Since these objects were preserved as cultural artifacts, it is necessary to make a decision in each specific case about what should be where. A miracle-working icon should be in a church. On the other hand, an icon that is not miracle-working and is very old ought to be in a museum, which it will be better preserved. A copy can be made for the church. The silver decoration of Alexander Nevsky’s reliquary should be in a museum, because it is an artefact of Russian jewellery from the Elizabethan era. It was saved as an artefact. The recipe is the same — a copy can be made, blessed and placed in the temple; we are doing this. The fact that these disputes are becoming increasingly frequent shows the Church in a very unflattering light. After all, all of these disputes can be resolved peacefully. At the Hermitage, we are storing the relics of Saints associated with various icons and reliquaries. We have already made a list of them and will transfer them to the Church. For those who are concerned with spirituality, there is nothing here to argue about. Both the Church and cultural institutions work in the spiritual sphere. There is no need to try to defeat anyone, we have a common purpose.